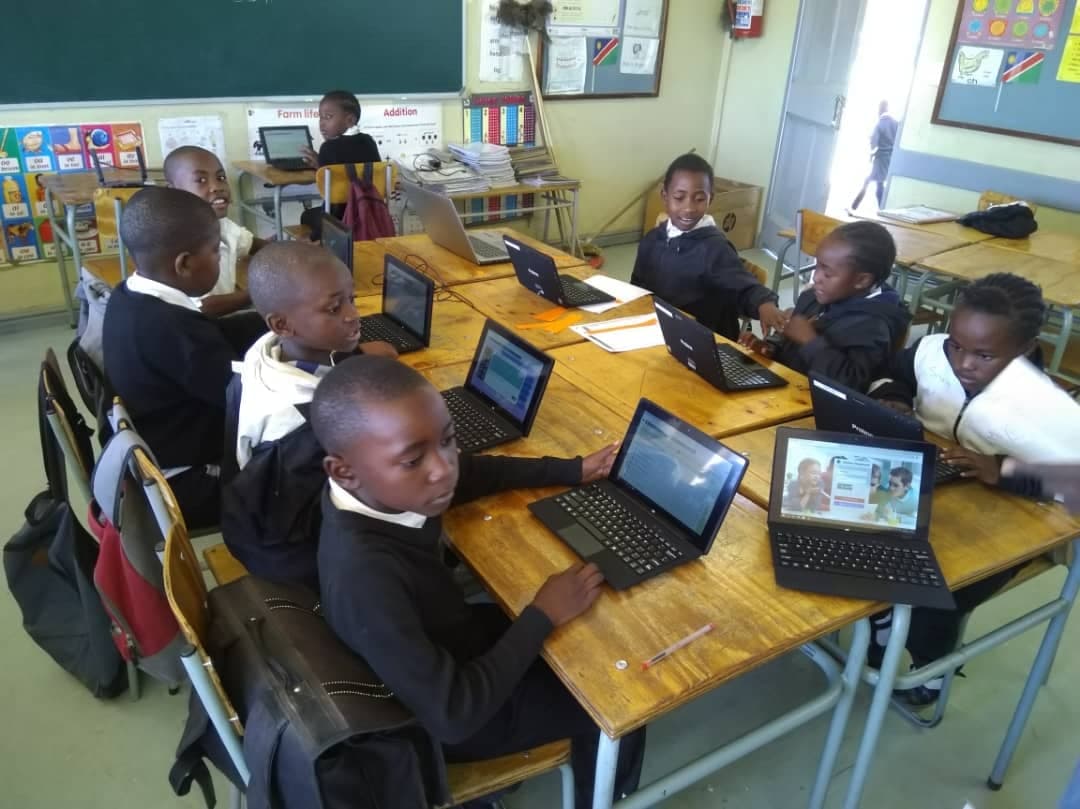 As a part of a bigger Future Education pilot in Namibia, two Finnish education technology platforms were introduced in two local schools. How was the new technology received by teachers and students and did they have an impact on learning?

What is Future Education Pilot in Namibia?

Future Education in Namibia is an education development project funded by Southern Africa Innovation Support (SAIS). The aim of the project is to improve the return to investment in education by piloting some of the aspects that are part of the successful Finnish education system in a Southern African context. A collaboration with local and Finnish entities is coordinated by Dololo operations. First pilots take place in the Faith Primary School and Berg-Op Academy.

The project is based on the idea of taking educational practises from Finland, localising them and then putting them into practice in Namibian context. Focus is on three areas: learning environment, teacher training and e-learning. Together with the local furnishing company Tabled Namibia, Polar Partner’s partner network and University Properties Finland Ltd will introduce new learning environments at the schools. To see if ICT and use of tablets could support the learning at schools, limited number of devices were tested in some of the classes. In the mathematics and coding classes children started to use platforms provided by Eduten and Mehackit, who both are part of the Polar Partner’s official partner network.

At the time of interviewing Tim Wucher, the CEO at Dololo, the project was in second of its three phases. Preparations started already in 2018 but the execution of refurnishing and e-learning started in June 2019. Next it’s time to look at the results and evaluate everything. “Return on investment is one of the things we look at”, says Wucher. He means observing the return of schools’ spending or the other stakeholders’ investment in education.  There is no point in investing in learning solutions that won’t work. If the results turn out well, we hope to scale the model to other local schools in the future.

After all the preparations were finished, the two schools received new tablets in early June 2019. The first phase was to train the teachers who would be using the Eduten and Mehackit platforms in their classes. I had the chance to interview the teachers in the first days of using them. Another interview was done when the pilots regarding EdTech companies were coming to an end.

In both Faith Primary and Berg-Op Academy, before the use of tablets, the use of technology during the classes was relatively low. A few of the teachers told that they would sometimes show students videos or other material from their own devices. Using Eduten Playground in the math classes and Mehackit’s methods in the coding was thus something new for the teachers also. Because of the long distance, training was mostly done via video calls and online videos. Teachers also had local Dololo personnel to help in person. As an additional support, the teachers were able to communicate with the trainers via chat groups.

In the beginning there were some hiccups. First, both teachers and students needed to get familiar with the new technology and programs. Especially for the little children getting familiar with the devices was a challenge in itself. Also, the scheduling of classes needed to be thought again as the groups are quite big. The classes needed to be divided into smaller groups when the programs were used. Internet connection wasn’t always working on their favour either. Despite all this, the teachers were excited to see how children would adapt and improve their skills in math and coding in the following weeks.

Mehackit offers several different artistic approaches to coding but in Namibia, the students were introduced to a music programme. It mixes coding with music composing which makes it fun and understandable for children. In Berg-Op, students had done some coding before being introduced to Mehackit. According to their teacher, Romanus Kanyanga, the new platform was quite easy to use as it was similar to the one used before. Besides few students who weren’t as interested in music, the students were enjoying the new approach to coding.

In math classes Eduten Playground was used once a week as an additional teaching method. The message from both schools was similar: the students got excited about math. Some of the children from Faith Primary even went to school on Saturday for extra class, just to use the platform. The teachers were happy to see that students became more confident and also helped each other with the calculations. At the time of our final interviews students hadn’t yet had learning assessment after starting the pilot. But it was clear that children were excited to do maths using the Playground.

The students weren’t the only ones who learnt something during the pilots. It was a learning experience for the teachers also. From one teacher managing to login without help to another learning to play digital piano. In the end, the teachers didn’t only get familiar with EdTech but realised that they can make learning exciting by using diverse teaching methods.